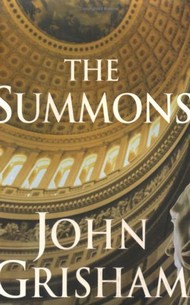 Ray Atlee is a professor of law at the University of Virginia. He's forty-three, newly single, and still enduring the aftershocks of a surprise divorce. He has a younger brother, Forrest, who redefines the notion of a family's black sheep.

And he has a father, a very sick old man who lives alone in the ancestral home in Clanton, Mississippi. He is known to all as Judge Atlee, a beloved and powerful official who has towered over local law and politics for forty years. No longer on the bench, the Judge has withdrawn to the Atlee mansion and become a recluse.

With the end in sight, Judge Atlee issues a summons for both sons to return home to Clanton, to discuss the details of his estate. It is typed by the Judge himself, on his handsome old stationery, and gives the date and time for Ray and Forrest to appear in his study.

Ray reluctantly heads south, to his hometown, to the place where he grew up, which he prefers now to avoid. But the family meeting does not take place. The Judge dies too soon, and in doing so leaves behind a shocking secret known only to Ray.

And perhaps someone else.