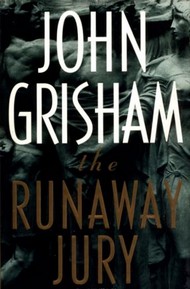 They are at the center of a multimillion-dollar legal hurricane -- 12 men and women who have been investigated, watched, manipulated, and harassed by high-priced lawyers and consultants who will stop at nothing to secure a verdict.

Now the jury must make a decision in the most explosive civil trial of the century, a precedent-setting lawsuit against a giant tobacco company. But only a handful of people know the truth -- that this jury has a leader, and the verdict belongs to him.

In Biloxi, Mississippi, a landmark tobacco trial with hundreds of millions of dollars at stake beginsroutinely, then swerves mysteriously off course. The jury is behaving strangely, and at least one juroris convinced he's being watched.

Soon they have to be sequestered. Then a tip from an anonymousyoung woman suggests she is able to predict the jurors' increasingly odd behavior.Is the jury somehow being manipulated, or even controlled? If so, by whom? And, more important,why?