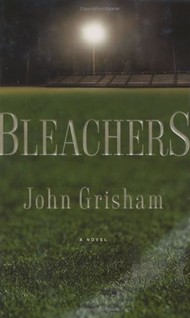 With Bleachers, bestselling author John Grisham presents a novel about high school football in a small Texas town, a place in which football has become a religion.

High school all-American Neely Crenshaw was probably the best quarterback ever to play for the legendary Messina Spartans. Fifteen years have gone by since those glory days, and Neely has come home to Messina to bury Coach Eddie Rake, the man who molded the Spartans into an unbeatable football dynasty.

Now, as Coach Rake’s “boys” sit in the bleachers waiting for the dimming field lights to signal his passing, they replay the old games, relive the old glories, and try to decide once and for all whether they love Eddie Rake – or hate him. For Neely Crenshaw, a man who must finally forgive his coach – and himself – before he can get on with his life, the stakes are especially high.