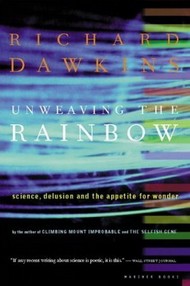 Unweaving the Rainbow: Science, Delusion and the Appetite for Wonder.

Keats accused Newton of destroying the poetry of the rainbow by explaining the origin of its colours. In this book, Richard Dawkins argues that Keats could not have been more mistaken, and shows how an understanding of science enhances our wonder of the world. This is the book Richard Dawkins was meant to write: a brilliant assessment of what science is (and isn't), a tribute to science not because it is useful but because it is uplifting.

Did Newton "unweave the rainbow" by reducing it to its prismatic colors, as Keats contended? Did he, in other words, diminish beauty? Far from it, says acclaimed scientist Richard Dawkins; Newton's unweaving is the key to much of modern astronomy and to the breathtaking poetry of modern cosmology.

Mysteries don't lose their poetry because they are solved: the solution often is more beautiful than the puzzle, uncovering deeper mysteries.

With the wit, insight, and spellbinding prose that have made him a best-selling author, Dawkins takes up the most important and compelling topics in modern science, from astronomy and genetics to language and virtual reality, combining them in a landmark statement of the human appetite for wonder.