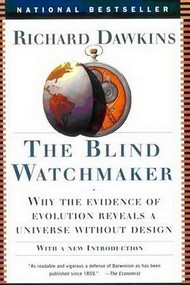 The Blind Watchmaker: Why the Evidence of Evolution Reveals a Universe without Design

Twenty years after its original publication, The Blind Watchmaker, framed with a new introduction by the author, is as prescient and timely a book as ever.

The watchmaker belongs to the eighteenth-century theologian William Paley, who argued that just as a watch is too complicated and functional to have sprung into existence by accident, so too must all living things, with their far greater complexity, be purposefully designed.

Richard Dawkins won both the Royal Society of Literature Award and the Los Angeles Times Literary Prize in 1987 for The Blind Watchmaker. The television film of the book, shown in the Horizon series, won the Sci-Tech Prize for the Best Science Programme of 1987.