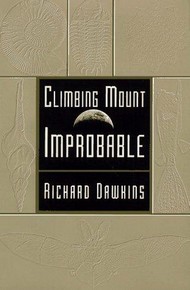 The human eye is so complex and works so precisely that surely, one might believe, its current shape and function must be the product of design. How could such an intricate object have come about by chance? Tackling this subject—in writing that the New York Times called "a masterpiece"—Richard Dawkins builds a carefully reasoned and lovingly illustrated argument for evolutionary adaptation as the mechanism for life on earth.

The towering cliffs of Mount Improbable can never, it seems, be climbed. In Richard Dawkins's remarkable book the heights of Mount Improbable represent the combination of perfection and improbability that is epitomized in the seemingly "designed" perfection of living things. From the combination of strength and sensitivity of an elephant's trunk to the life-saving camouflage of an ant-mimicking beetle, the living world is populated by creatures that seem miraculously designed for the lives they lead.

But these complex and brilliantly effective features cannot have come about by undirected chance. That would be equivalent to scaling the sheer face of the mountain in a single leap. The only way to explain seemingly designed objects is by slow, gradual evolution - inching cumulatively, almost infinitely slowly by the standards of human history, up the gentle paths on the far side of Mount Improbable.

Evocative illustrations accompany Dawkins's eloquent descriptions and we are led through the silken world of spiders; we are shown how wings gradually sprouted on the bodies of flightless animals; we see how the fig is a garden for its own teeming population of insects; and we learn that the eye has evolved no less than forty times independently. And through it all runs the thread of DNA, the molecule of life, responsible for its own destiny on an unending pilgrimage through geological time.