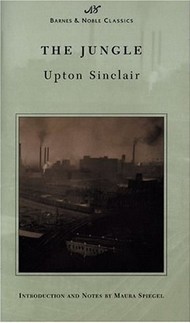 Upton Sinclair's The Jungle is a vivid portrait of life and death in a turn-of-the-century American meat-packing factory. A grim indictment that led to government regulations of the food industry, The Jungle is Sinclair's extraordinary contribution to literature and social reform.

1906 bestseller shockingly reveals intolerable labor practices and unsanitary working conditions in the Chicago stockyards as it tells the brutally grim story of a Slavic family that emigrates to America full of optimism but soon descends into numbing poverty, moral degradation, and despair. A fiercely realistic American classic that will haunt readers long after they've finished the last page.

This novel inspired a passage in 1906 of the Pure Food and Drug Act and the Meat Inspection Act, stands as a classic of twentieth-century American literature and social protest.