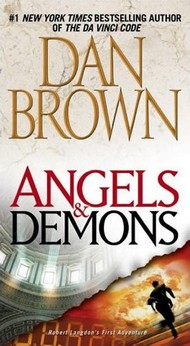 The murder of a world-famous physicist raises fear that the Illuminati are operating again after centuries of silence, and religion professor Robert Langdon is called in to assist with the case. By the author of Digital Fortress.

An ancient secret brotherhood. A devastating new weapon of destruction. An unthinkable target.

World-renowned Harvard symbologist Robert Langdon is summoned to a Swiss research facility to analyze a cryptic symbol seared into the chest of a murdered physicist.

What he discovers is unimaginable: a deadly vendetta against the Catholic Church by a centuries-old underground organization -- the Illuminati. Desperate to save the Vatican from a powerful time bomb, Langdon joins forces in Rome with the beautiful and mysterious scientist Vittoria Vetra.

Together they embark on a frantic hunt through sealed crypts, dangerous catacombs, deserted cathedrals, and the most secretive vault on earth...the long-forgotten Illuminati lair.