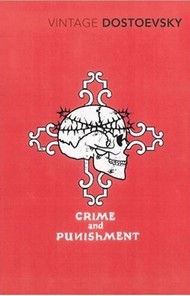 The Russian writer Fyodor Dostoevsky (1821-1881), is one of the biggest novelist of the history an contributed with some of the bases for the modern novels.

Crime and Punishment is one of the best known works by Dostoevsky and one of the most important novels of universal literature.

Determined to overreach his humanity and assert his untrammelled individual will, Raskolnikov, and impoverished student living in the St. Petersburg of the Tsars, commits an act of murder and theft. He is desperate for money, but he convinces himself that his motive for the murder is to benefit mankind and sets into motion a story which, for its excruciating suspense, its atmospheric vividness, and its profundity of characterization and vision, is almost unequaled in the literatures of the world.

The novel illuminates the eternal struggle between human emotions and desire, and the harsh laws of ethics and justice. Part thriller and part philosophical meditation, this is a penetrating look at the core of human nature.