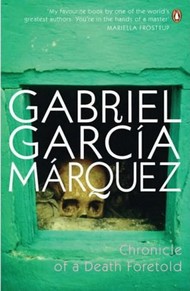 Chronicle of a Death Foretold

The Nobel laureate weaves a story of a fantastic wedding, the return of the bride to her parents in disgrace, her brothers' resolve to seek revenge on her corruptor, and the townspeoples' refusal to depart from routine.

Gabriel Garcia Marquez has rightfully earned the reputation as a master of magic realism. Despite being Chronicle of a Death Foretold maybe his most "realistic" novel it's also a structural masterpiece. It's amazing how a novel's plot is put together in a non-linear fashion and how Garcia Marquez inventiveness manages to sustain dramatic tension after having revealed many of the characters' fates.

A man returns to the town where a baffling murder took place 27 years earlier, determined to get to the bottom of the story. Just hours after marrying the beautiful Angela Vicario, everyone agrees, Bayardo San Roman returned his bride in disgrace to her parents. Her distraught family forced her to name her first lover; and her twin brothers announced their intention to murder Santiago Nasar for dishonoring their sister.

Yet if everyone knew the murder was going to happen, why did no one intervene to stop it? The more that is learned, the less is understood, and as the story races to its inexplicable conclusion, an entire society--not just a pair of murderers, is put on trial.

"On the day they were going to kill him, Santiago Nasar got up at five-thirty in the morning to wait for the boat the bishop was coming on. He'd dreamed he was going through a grove of timber trees where a gentle drizzle was falling, and for an instant he was happy in his dream, but when he awoke he felt completely spattered with bird shit. "He was always dreaming about trees," Plácida Linero, his mother, told me twenty-seven years later, recalling the details of that distressing Monday. "The week before, he'd dreamed that he was alone in a tinfoil airplane and flying through the almond trees without bumping into anything," she said to me. She had a well-earned reputation as an accurate interpreter of other people's dreams, provided they were told her before eating, but she hadn't noticed any ominous augury in those two dreams of her son's, or in the other dreams of trees he'd described to her on the mornings preceding his death."