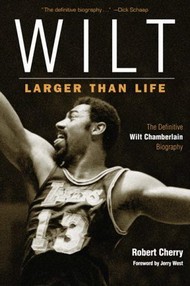 This book is an authoritative and entertaining biography of Wilt Chamberlain, one of the twentieth century's most controversial athletes, examines his extraordinary athletic achievements, as well as his unique and sometimes turbulent lifestyle...

There are celebrities and so-called legends. And then there is Wilton Norman Chamberlain, unique and unforgettable, and one of the 20th century’s greatest and most controversial athletes.

Wilt Larger Than Life examines Chamberlain’s fascinating story, delving into his life both on and off the basketball court, and spanning his childhood to his death in 1999. The author spent four years crisscrossing the country researching Wilt’s life and gathering stories from the most important people in it. The result is the most thorough and entertaining book ever written about this American icon, a worthy addition to the annals of sports biographies.

Among those interviewed were Wilt’s longtime lawyer, doctor, and accountant; many of Wilt’s other male and female friends and associates; and his basketball teammates, coaches, and opponents at every level of his momentous career.

This is a portrait of Wilt that relatively few people, except family and friends, have ever seen. Wilt covers Chamberlain’s stupendous athletic achievements, including the memorable basketball battles with Bill Russell, Willis Reed, and Kareem Abdul-Jabbar, but equally compelling is the portrayal of the private Wilt and his unique lifestyle.

Included in this in-depth look at the man and his life are a "tour" through his amazing home; vignettes of the beach volleyball life to which he was attracted; the sports teams he sponsored; the notorious claim of making love to twenty thousand women and the related issue of why he never married; his days (and nights) after his retirement from basketball; and his sad final weeks. Here, finally, is a biography that does justice to the myth and the man that was Wilt.