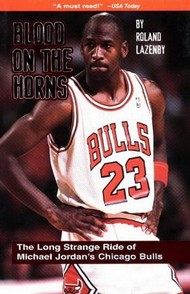 Blood on the Horns: The Long Strange Ride of Michael Jordan's Chicago Bulls

This is a fascinating inside look at the life behind the scenes of the Jordan's Bulls...

Through the use of exclusive on-the-record interviews with a variety of Bulls players and staff members, Lazenby recreates the drama over 1997 and 1998 as the Bulls struggle to remain cohesive.

This book captures the harsh, dark side of Jordan's competitive nature in a series of vignettes. In subsequent one-on-one interviews, Jordan unabashedly acknowledges his harsh treatment of his teammates and GM Krause.

The book will at last explain to the millions of Bulls fans why the team's management and ownership seem so eager for Jackson, Jordan and company to move on, despite their overwhelming success.

Not since The Jordan Rules has a book captured such a poignant inside look at the most intriguing team in pro basketball history.