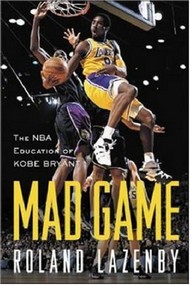 The behind-the-scenes story of Kobe Bryant's meteoric rise: In Mad Game, Roland Lazenby explores the world of Kobe Bryant, who, at 23, is already a seasoned NBA veteran and the owner of two championship rings with the Los Angeles Lakers. Yet the road to glory has not been an easy one for Bryant. It has taken his iron will and enormous self-assurance to battle elements both within the NBA and on his own team that could force him to reshape his dreams of being number one, of being "The Man."

When the 17-year-old phenom left high school in 1996 to join the glitzy Los Angeles Lakers, Bryant faced a wave of media hype declaring him the next Michael Jordan. Mad Game is the story of how these circumstances propelled his rapid rise through the NBA, only to result in conflict with--and, at times, alienation from--his veteran teammates.

A cautionary tale emerges from the hard lessons Bryant learned along the road to NBA stardom. Yet this is also a story of triumph, of a uniquely gifted young athlete with an uncanny, instinctive feel for the game who matures as a player while trying to remain true to himself. In this updated paperback edition, Lazenby adds new material on the continued rise of Bryant through the 2000-2001 season, including his on- and off-court clashes with Shaquille O'Neal and how their conflicts nearly cost their team the NBA championship.