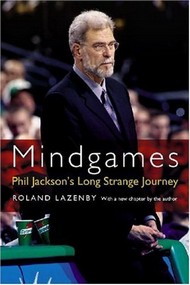 Mindgames follows the journey of Phil Jackson to the top of basketball's coaching hierarchy, a rise that took him from failure and obscurity in the CBA to eight championship rings in the NBA. Along the way he turned multimillionaire players on to meditation, transformed the Michael Jordan-led Chicago Bulls from a one-man show into a five-man team of domination, and, after battling with Bulls management, ended one dynasty to start another on the West Coast.

Sportswriter Roland Lazenby, author of the bestselling Blood on the Horns and Mad Game, reveals the fascinating elements of Jackson's life and mental approach to coaching that have made followers of his players but also have made him--perhaps not surprisingly--unpredictable and sometimes unpopular to outsiders. It is also a detailed basketball story, with entertaining accounts from Jackson's years with the New York Knicks under the legendary Red Holzman to his remarkable eight championships coaching first the Chicago Bulls and then the Los Angeles Lakers. This paperback edition of Mindgames includes a new chapter on the 2000-2001 season, in which Jackson and the Lakers overcame the perils of success and team-breaking player infighting to capture their second consecutive NBA title.