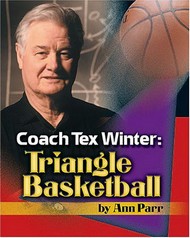 What does it take to be a team player?

Could your life use a dose of harmony and cooperation? Tex Winter's belief in coordinated efforts awakened at age ten when his father died. What resulted was a trust in each family member's worth to make a fully functioning team. Applied to basketball, this idea became his famous Triangle Offense used by Phil Jackson to win multiple NBA championships with his Chicago Bulls and Los Angeles Lakers teams. With a little practice, you can apply Tex's Triangle ideas to your own everyday relationships at home, at school, and at work.

Tex Winter began his coaching career in the fall of 1947 as assistant coach at Kansas State University and continues through this season, 2005-06 as assistant coach and consultant with the Los Angeles Lakers. He has stayed in the field, teaching and coaching, nearly sixty consecutive seasons, except for the 2004-05 season when he followed through on his threat to retire. The retirement lasted one season.

This book highlights Tex's background, values and character; how he found his love for sports, followed it, and thrived. It follows the development of his major contribution to the game of basketball- the Triple Post Offense, often called the Triangle Offense. It provides background for the Triangle's evolution, and it underlines the sometimes rocky and painful road to the legacy he leaves. As his friend Pete Newell says, "He changed the game of basketball and gave a name to a particular pattern of offense."

Most of all, this book shows how Tex Winter became the teacher and coach that he, as a young teen, defined as his life's work.