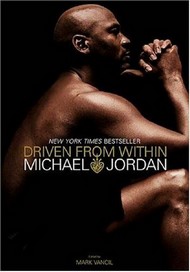 The sports icon pays tribute to the mentors, teachers, and role models who shaped his life and career, sharing the intimate lessons he has learned about the power of collaboration and teamwork...

"It all started with an appetite to prove. Whether it was competing with my siblings or trying to get attention from my parents, I wanted to show what I could do, what I was capable of accomplishing. I wanted results, and I was driven to find out the best way to get them."

Everyone knows the results. In Driven from Within, Michael Jordan and those in his inner circle reveal the philosophy that makes it all happen.

Michael Jordan is the rare global icon whose celebrity extends beyond his original stage and onto multiple platforms.

His relentless determination produced six NBA Championships and some of the most spectacular performances in sports history, while his enduring grace and unique sense of style made him equally famous in the worlds of fashion, business, and marketing.

In Driven from Within, Michael makes it clear that the basis for his phenomenal success came from the inside out, thanks in part to those who guided him along the way. His skill, work ethic, philosophy, personal style, competitiveness and presence have flowed from the basketball court and into every facet of his life.

This is a book about the power of collaberation and teamwork, the awe-inspiring energy generated when people combine their creativity and passion, and a fearless desire to lead.

Whether waking at 6 A.M. to work out as a high school junior, or spending hours with legendary designer Tinker Hatfield on the intricacies of state-of-the-art shoe design, Michael Jordan has never wavered in his desire to be the best.

"Nothing of value comes without being earned, That's why great leaders are those who lead by example first.You can't demand respect because of a title or a position and expect people to follow. That might work for a little while, but in the long run people respond to what they see."

I Can't Accept Not Trying: Michael Jordan on the Pursuit of Excellence, de Jordan