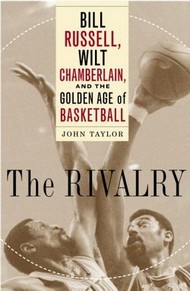 The Rivalry: Bill Russell, Wilt Chamberlain and the Golden Age of Basketball

A brilliantly written account of the NBA’s glory days and the rivalry that dominated the era.

In the mid-1950s, the NBA was a mere barnstorming circuit, with outposts in such cities as Rochester, New York, and Fort Wayne, Indiana. Most of the best players were white; the set shot and layup were the sport’s chief offensive weapons. But by the 1970s, the league ruled America’s biggest media markets; contests attracted capacity crowds and national prime-time television audiences. The game was played “above the rim”–and the most marketable of its high-flying stars were black. The credit for this remarkable transformation largely goes to two giants: Bill Russell and Wilt Chamberlain.

In The Rivalry, award-winning journalist John Taylor projects the stories of Russell, Chamberlain, and other stars from the NBA’s golden age onto a backdrop of racial tensions and cultural change. Taylor’s electrifying account of two complex men–as well as of a game and a country at a crossroads–is an epic narrative of sports in America during the 1960s.

It’s hard to imagine two characters better suited to leading roles in the NBA saga: Chamberlain was cast as the athletically gifted yet mercurial titan, while Russell played the role of the stalwart centerpiece of the Boston Celtics dynasty. Taylor delves beneath these stereotypes, detailing how the two opposed and complemented each other and how they revolutionized the way the game was played and perceived by fans.

Competing with and against such heroes as Jerry West, Tom Heinsohn, Bob Cousy, John Havlicek, and Elgin Baylor, and playing for the two greatest coaches of the era, Alex Hannum and the fiery Red Auerbach, Chamberlain and Russell propelled the NBA into the spotlight. But their off-court visibility and success–to say nothing of their candor–also inflamed passions along America’s racial and generational fault lines. In many ways, Russell and Chamberlain helped make the NBA and, to some extent, America what they are today.

Filled with dramatic conflicts and some of the great moments in sports history, and building to a thrilling climax–the 1969 final series, the last showdown between Russell and Chamberlain–The Rivalry has at its core a philosophical question: Can determination and a team ethos, embodied by the ultimate team player, Bill Russell, trump sheer talent, embodied by Wilt Chamberlain?

Gripping, insightful, and utterly compelling, the story of Bill Russell and Wilt Chamberlain is the stuff of sporting legend. Written with a reporter’s unerring command of events and a storyteller’s flair, The Rivalry will take its place as one of the classic works of sports history.