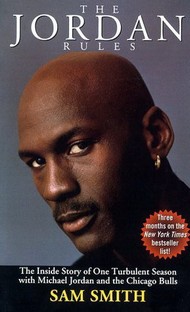 A provocative eyewitness account, The Jordan Rules delivers all the nonstop excitement, tension, and thrills of a championship season -- and an intense, fascinating portrait of the incomparable Michael Jordan...

In his book The Jordan Rules, which chronicles the Chicago Bulls' first championship season, Sam Smith takes the #1 Bull by the horns to reveal the team behind the man...and the man behind the Madison Avenue smile. Here is the inside game, both on and off the court, including: