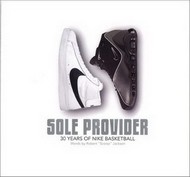 Take a look at Nike's most memorable shoes, campaigns, athletes, moments, and relationship with basketball throughout the years...

Designed with Nike's trademark visually gripping graphics, Sole Provider: Thirty Years of NIKE Basketball is a collection of Nike hoop shoes and the subculture that surrounds them.

With text by Slam magazine editor-at-large Robert "Scoop" Jackson, this book gives the inside story of NIKE Basketball - from its inception in 1972 to its incredible success as the basketball brand with over 60% market share.

It features spreads that illustrate the development of the most pivotal shoes during this period, as well as interviews with designers and drawings of their prototypes; The key shoes and the players associated with them including: The Blazer (George "Iceman" Gervin), The Bruin (Moses Malone), The Air Force I (Michael Ray Richardson), The Air Jordan (Michael Jordan), The Alpha Force (Charles Barkley), and many more.

It also features never-before-published images - as well as insights - from the Nike archives of iconic NBA players including Moses Malone, Patrick Ewing, Michael Jordan, Charles Barkley, and Jason Kidd, among others and still from famous advertising campaigns by Wieden & Kennedy featuring Nike alumni including Spike Lee, Bugs Bunny, Steve Martin, Godzilla, and Lil' Penny, among others.

Index pages provide an at-a-glance look at all the shoes produced. It includes a chronological history of the Nike and NBA partnership over three decades.