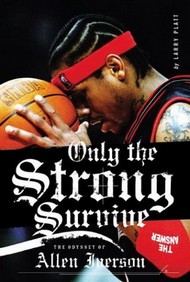 Only The Strong Survive: The Odyssey of Allen Iverson

The book is the first full-length biography of iconic basketball superstar and 2001 NBA MVP Allen Iverson... Filled with exclusive interview material and unprecedented access to many of Iverson's inner circle, Only the Strong Survive provides the first in-depth look at the truth behind this newly minted legend...

There are few figures among America's media-saturated landscape that loom larger than the National Basketball Association's undeniable superstar Allen Iverson. He was the first overall pick of the 1996 NBA draft, and the spotlight has not left him since.

Defiantly tattooed, with his hair in cornrows, the six-foot Philadelphia 76ers point guard has been vilified by a sports press still fawning over Michael Jordan's non-threatening, clean-cut visage. From Iverson's rap sheet to his rap album, from his on-court feats to his off-court antics, breathless fans and journalists alike seem determined to track his every move.

Part sports star, part antihero, part hip-hop icon, Iverson has managed to cross over into the mainstream of American culture -- without compromise.

It wasn't long before Iverson's prodigious athletic skills became apparent. Raised in poverty, with his father in prison, Iverson retreated to his local playgrounds and found escape from the all-too-common woes of the inner-city dweller. In one summer alone, eight of his friends were killed in shootings. But Iverson's talent simply could not be denied, and basketball remained the one constant in his tumultuous existence.

And so Iverson, despite all odds, rose. A now-infamous scuffle in a bowling alley led to near race riots in Iverson's hometown of Newport News, Virginia, resulting in his being sentenced to jail time during high school. Eventually, Governor Douglas Wilder granted him clemency, the conviction was overturned on appeal, and his ascent continued. Georgetown coach John Thompson stepped in, giving Iverson a berth on his team at a time when other universities were too skittish to offer the same. It was their loss. After two tremendous years at Georgetown, Iverson declared himself eligible for the NBA draft. And the rest is history.

In Only the Strong Survive, Larry Platt offers up the first full portrait of a complicated and intensely private star, a man whose loyalty to his family, the streets, and his friends (a group he calls Cru Thik) trumps any other concerns -- and that includes multimillion-dollar endorsement deals. Possessing an almost otherworldly talent, Allen Iverson is determined that everyone -- his mom, his homeboys, his cousins -- benefit from it. By embracing his roots and refusing to conform, Iverson has won fans and admirers far beyond the boundaries of the sports world.