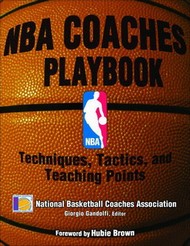 The Phoenix Suns' Steve Nash shines in running the break, but how do his teammates know where to go to get open to receive his passes? Orlando's Dwight Howard is a tremendous talent in the post, but how has he improved and added new dimensions? And how is it that Utah's Deron Williams and Carlos Boozer run the screen-and-roll as smoothly as Jazz legends John Stockton and Karl Malone did years before?

Coaching. Yes, even in a league loaded with superior athletic talent, the teaching, tactical maneuvers, and strategies provided by NBA coaches are second to none. And as younger, sometimes less mature and less experienced players from all over the world have entered the league, those coaching skills are more diverse and better honed than ever before.

Now NBA Coaches Playbook takes you into the practice sessions and sideline huddles with detailed Xs and Os and more from the game's best at maximizing performance on the court. Let the likes of Phil Jackson, Mike D'Antoni, Avery Johnson, Stan Van Gundy, George Karl, Eddie Jordan, Mike Dunleavy, Kareem Abdul-Jabbar, and many other head and assistant coaches provide you with new insights to benefit your own team and individual players.