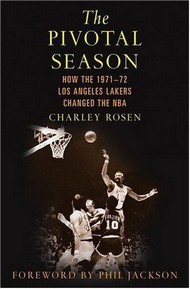 The Pivotal Season: How THe 1971-72 Los Angeles Lakers Changed The NBA

This book is an in-depth look at the most influential Lakers championship team-the coach, the players, the season that changed the NBA.

The 1971-72 basketball season was one to go down in history. For the Los Angeles Lakers it was a season of records, an incredible championship, and many personal victories-by a team featuring several players bound for the NBA Hall of Fame. For the sport of basketball it was a season of transition, when West Coast style overcame East Coast sophistication. And for the fans, it was simply a season to remember.

Charley Rosen, one of the best sports historians in recent years, brings to life all of the memories, events, and spectacles. Featuring an iconic all-star roster that includes Wilt Chamberlain and Jerry West, The Pivotal Season is an account of some of the greatest names in the game and their contributions to one of the most remarkable seasons in history. This dramatic narrative credits the Lakers coach, Bill Sharman, who, though virtually unknown today, was the best basketball coach of his time.

Photographs and action-packed narrative portray the pivotal 1971-72 season in this memorable book of sports history, which includes a special foreword by Phil Jackson. Basketball fans will be able to relive this amazing story of despair turned to triumph, when the Los Angeles Lakers won a record thirty-three consecutive games, persevered and defeated their archrival, the New York Knicks, won the championship-and in so doing changed the sport of basketball forever.

The First Tip-off: The Incredible Story of the Birth of the NBA, de Rosen