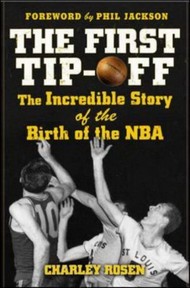 The First Tip-off: The Incredible Story of the Birth of the NBA

"Charley Rosen has undertaken the challenge of documenting the latest and greatest history of the game professionally--and has done so to great success. . . . . When I finished the book it seemed as if I had gone through another season, injuries and all. . . . Rosen skillfully leads readers through the NBA's first steps along its journey toward what it has become today.” --Phil Jackson, from the Foreword

Return to basketball's salad days, when the boys were green and the money didn't matter...

On November 1, 1946, in the NBA's (then called the BAA) first game ever, as the visiting New York Knickerbockers defeated the Toronto Huskies, the first point in the history of the NBA was scored by the Knicks' Oscar “Ossie” Schectman. It was the point that launched more than six million points to come, and Ossie did it, like all of his team members, for a mere $60 and a passionate love of the game. Who could have guessed back then that this fledgling league of 11 ragtag teams would one day grow into the billion-dollar international phenomenon that it is today?

In the book The First Tip-Off, veteran basketball writer Charley Rosen takes you back to the NBA's humble beginnings, when a colorful cast of characters laid the foundation for the empire that is today's NBA. With riveting writing, he gives you a prime seat courtside for every memorable two-handed underhand layup and hook shot of that first season, when professional basketball struggled to evolve from grudge matches--where head-butting was encouraged and players shoved each other, hockey-style, into the chicken-wire fence wrapped around the court to protect them from lit cigars tossed by angry fans--to a civilized game of elegance and skill. It wasn't an easy transformation.

In 1946, the players dribbled their way down slippery courts laid over ice rinks in stadiums that reeked of the previous night's rodeo. They were tough guys, ex-soldiers back from World War II, and still-green farm boys, thrilled to be away from home for the first time. They learned to play ball using wadded-up rags and fire escapes for baskets. They learned in fields, in church basements, and on school rooftops. Rough around the edges, they brought their homegrown skills to the new league and started something big.

From the Boston Celtics to the Washington Capitols, through in-depth interviews with surviving players, Rosen brings the spirits and the stories of these men to life as he weaves a fascinating and poignant portrait of a league struggling to gain a foothold in the American consciousness.

The Pivotal Season: How THe 1971-72 Los Angeles Lakers Changed The NBA, de Rosen