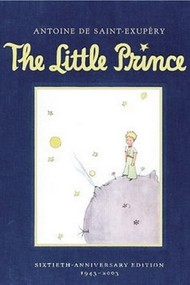 Few stories are as widely read and as universally cherished by children and adults alike as The Little Prince.

On one level it is the story of an aviator whose plane is forced down in the Sahara Desert and encounters a little prince from a small planet, who relates his adventures in seeking the secret of what is important in life, while on the other hand it is a thought-provoking allegory of the human condition.

The Little Prince's journey from planet to planet takes him to tiny worlds populated by a single character: a king, a businessman, a geographer or a lamplighter, all whom signify some futile aspect of adult existence.

It is a tender story painted with tones of sadness, solitude and some satiric touches and since 1943, the wise little boy from Asteroid B-612 (a place so small that he can watch the sunset 44 times a day) has led children and their adults to deeper understandings of love, friendship, and responsibility. The Little Prince is a cherished story, read by millions of people in more than a hundred languages.

A year after it's first publication, the author, Saint-Exupéry, disappeared over the Mediterranean while flying a reconnaissance mission for his French air squadron.