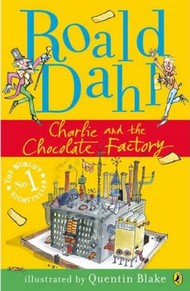 Charlie and the Chocolate Factory

Four nasty, repulsive children and one honest, loyal, and starving boy win a tour of the world's most fantastic chocolate factory from the world's most eccentric chocolatier Mr. Willy Wonka'. Each of them takes advantage of the situation in his own way. The classic tale of fantasy, this delightful masterpiece depicts all sorts of characters: greedy, selfish, obnoxious, compassionate, loveable, and generous; and the story's moralistic factor becomes uproariously apparent early on.

When Charlie Bucket finds himself the proud winner of a Golden Ticket in a chocolate bar, he knows he has the greatest treat in the world in store for him. Join Charlie on his fantastic world-famous adventures in Willy Wonka's miraculous chocolate factory, where he sees strawberry-juice water pistols, luminous lollipops, a chocolate river, and rainbow drops -- and has the time of his life.

"Here is the exciting, hilarious, and moral story of the five prizewinners. They were, alas, repulsive children, with the exception of Charlie Bucket, whose family was so poor he could only have one candy bar a year. Rich in humor, acutely observant, Dahl lets his imagination rip in fairyland."--The New York Times.

Roald Dahl passed away in 1990, but his popularity and that of his books—Charlie and the Great Glass Elevator, James and the Giant Peach, and Danny the Champion of the World, to name just a few—continues to grow.