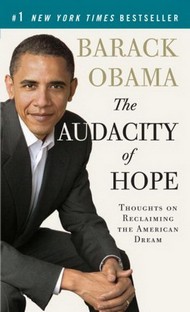 The Audacity of Hope: Thoughts on Reclaiming the American Dream

Ilinois's Democratic senator illuminates the constraints of mainstream politics all too well in this sonorous manifesto. Obama castigates divisive partisanship (especially the Republican brand) and calls for a centrist politics based on broad American values.

His own cautious liberalism is a model: he's skeptical of big government and of Republican tax cuts for the rich and Social Security privatization; he's prochoice, but respectful of prolifers; supportive of religion, but not of imposing it. The policy result is a tepid Clintonism, featuring tax credits for the poor, a host of small-bore programs to address everything from worker retraining to teen pregnancy, and a health-care program that resembles Clinton's Hillary-care proposals.

On Iraq, he floats a phased but open-ended troop withdrawal. His triangulated positions can seem conflicted: he supports free trade, while deploring its effects on American workers (he opposed the Central American Free Trade Agreement), in the end hoping halfheartedly that more support for education, science and renewable energy will see the economy through the dilemmas of globalization. Obama writes insightfully, with vivid firsthand observations, about politics and the compromises forced on politicians by fund-raising, interest groups, the media and legislative horse-trading. Alas, his muddled, uninspiring proposals bear the stamp of those compromises. (Oct. 17)...

At the heart of this book is Senator Obama’s vision of how we can move beyond our divisions to tackle concrete problems. He examines the growing economic insecurity of American families, the racial and religious tensions within the body politic, and the transnational threats–from terrorism to pandemic–that gather beyond our shores. And he grapples with the role that faith plays in a democracy–where it is vital and where it must never intrude. Underlying his stories about family, friends, members of the Senate, even the president, is a vigorous search for connection: the foundation for a radically hopeful political consensus...

Political inclinations will determine whether Obama's solutions or intentions are valued or disregarded. However, in his sincerest moments, he seizes hold of the problems plaguing the nation while criticizing both sides' failure to grasp the actual problem and to become bogged down in petty politics. He emphasizes the complexity of politics in a pluralist country spread out over millions of square miles. But even in his exploration of the political landscape, he does not hesitate to admit to his own limitations within the system

Change We Can Believe In: Barack Obama's Plan to Renew America's Promise , de Obama
Dreams from My Father: A Story of Race and Inheritance , de Obama