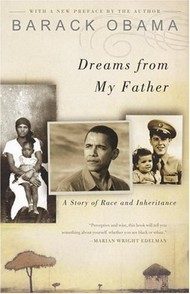 Dreams from My Father: A Story of Race and Inheritance

In this lyrical, unsentimental, and compelling memoir, the son of a black African father and a white American mother searches for a workable meaning to his life as a black American.

Barack Obama opens his story in New York, where he hears that his father - a figure he knows more as a myth than as a man - has died in a car accident. The news triggers a chain of memories and inspires an emotional odyssey, as Barack retraces his family's unusual history: the migration of his mother's family from small-town Kansas to the exotic, dreamlike islands of Hawaii; the love that develops between his mother and a promising young Kenyan student, a love nurtured by youthful innocence and the integrationist spirit of the early sixties; his father's departure from Hawaii when Barack is only two, as the realities of race and power reassert themselves; and Barack's own painful awakening to the fears and doubts that exist not just between the larger black and white worlds but within himself.

The Audacity of Hope: Thoughts on Reclaiming the American Dream, de Obama
Change We Can Believe In: Barack Obama's Plan to Renew America's Promise , de Obama