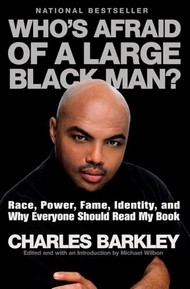 Who's Afraid of a Large Black Man

From the inimitable Charles Barkley, author of The New York Times bestselling I May Be Wrong But I Doubt It, comes a frank, fearless, funny, and explosive look at the reality of race and racism in America today. Citing the obstacles standing in the way of harmonious race relations in the United States, a cautionary analysis of the nation's growing racial segregation describes the author's experiences of talking about race with interviewees ranging from students to KKK members, addressing such issues as interracial relationships, affirmative action, and racial stereotypes...

The thing about race, Charles Barkley says, is we talk about it only when something bad happens and tempers are high, and so all we do is shout at one another across a chasm that's wide and getting wider. The rest of the time we try to pretend that the chasm isn't there. The way to get real about things, Barkley demonstrates in this book, isn't to shout and point fingers, but to expose all the hypocrisy and phoniness that keep us from talking about the way things really are, and even to find the humor in all the crazy disconnects and misunderstandings between the different races in America.

It's time someone did, because things aren't getting better, as he's here to show us. Racism has just gone underground: Sure, celebrities like him get the white-glove treatment, but in the meantime, we're living in a country that's growing steadily more racially segregated. If you're white, what are the odds you live or work with a significant number of black people? The odds are low and getting lower. When news of the Kobe Bryant case broke, 70 percent of whites polled thought he did it; 70 percent of blacks polled thought he was innocent. What's that about?, Charles Barkley wants to know. Until we learn to see into one another's minds and hearts a little more and, crucially, to laugh with one another, we're just going to keep living the lie that racism has gone away just because it's out of plain sight.

This book is part rant, part personal story, and part investigation: Barkley sounds off on a wonderful range of issues relating to the subject, from interracial love to affirmative action to real estate to racial stereotypes, and he relates personal stories from his own life experience. He also goes across America to see for himself where the country is with race, talking to students in Ann Arbor about affirmative action, sitting down with the Grand Dragon of the Alabama KKK, and drawing in many other famous Americans to talk about race in their own lives and lines of work.

I May Be Wrong, But I Doubt It, de Barkley