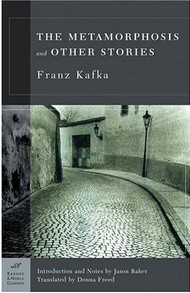 Virtually unknown during his lifetime, Franz Kafka is now one of the world’s most widely read and discussed authors. His nightmarish novels and short stories have come to symbolize modern man’s anxiety and alienation in a bizarre, hostile, and dehumanized world.

This vision is most fully realized in Kafka’s masterpiece The Metamorphosis, a story that is both harrowing and amusing, and a landmark of modern literature. In this, his most famous story, Franz Kafka explores the notions of alienation and human loneliness through extraordinary narrative technique and depth of imagination.

Gregor Samsa awakens one morning to find himself transformed into a repulsive bug. Trapped inside this hideous form, his mind remains unchanged—until he sees the shocked reaction of those around him. He begins to question the basis of human love and, indeed, the entire purpose of his existence. But this, it seems, is only the beginning of his ordeal.

Franz Kafka is one of the most prominent figures of 20th-century literature; his work, much of which was published posthumously, includes The Trial and The Castle.