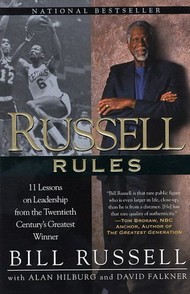 Bill Russell shares the insights, the memories, and most important, the essential 'rules of success' that influenced him in every aspect of his life, from raising a daughter as a single father to becoming a successful coach and mentor to others...

He epitomizes innovation, teamwork, and leadership. Now, Bill Russell, winner of eleven championships as a player and coach of the Boston Celtics and five-time NBA Most Valuable Player, reveals the eleven lessons that helped him achieve his goals and can help anyone attain success in their professional and personal lives.

Bill Russell has been hailed as the greatest team player of the twentieth century, the most important and most valuable basketball player ever, and its greatest winner. Every CEO, manager, entrepreneur, or parent can benefit from his original perspectives on leadership and teamwork, which helped this living legend succeed beyond what anyone in his profession has done before or since.

In Russell Rules, Bill Russell shares for the first time in print the insights, humor, memories, and most important, the essential "rules of success" that made him and his team perennial champions. He also shares his personal thoughts on his legendary battles with Wilt Chamberlain as well as how others (Michael Jordan and Kareem Abdul-Jabbar) would have fared with him in head-to-head play. filled with never-before-revealed stories of his days playing with Celtic greats such as Bob Cousy, Tom Heinsohn, Sam and K.C. Jones, John Havlicek, and coach Red Auerbach, this book offers inspiring lessons on commitment, personal integrity, team ego, and craftsmanship.

Note: Bill Russell won eleven championships in thirteen seasons with the Boston Celtics and coached the team in two of those championships.