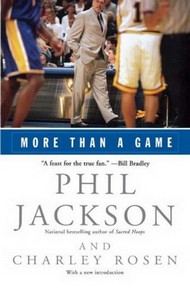 More Than a Game

Phil Jackson, One of the great coaches on NBA history reveals how he turned the Lakers around, teaching discipline to a seemingly undisciplined team and leading the Lakers to a world championship, and examines the key role of the Triangle offense... (Note this book talks about the Michael Jordan Bulls and Jackson's first years with the Lakers, it does not include the post Shaq Lakers)

Phil Jackson is the most celebrated coach in basketball today, earning that respect by guiding his teams in Chicago and Los Angeles to an astounding eight NBA championships. The key to his success, he thinks is his ability to understand the complexities of the players as well as the intricacies of the game. With this memorable book, Phil joins his friend Charley Rosen, a former player and coach who knows success at the game's highest levels, to bring new insight to the challenge of coaching and to honor the innate grace of basketball and its players.

Jackson and Rosen take you from the cracked blacktop courts of the inner city to the polished hardwood of the country's finest arenas, exposing the demanding reality of professional basketball: a world of glamour, glitter, and greed, in which nobility can still be found in the single-minded pursuit of athletic perfection.

From his playing days in college and with the world champion Knicks of the 1970's to his victories courtside with the Bulls and the Lakers, Jackson relates his philosophy of coaching, fondly talks about the memorable players and plays of the past, and candidly expresses his feelings about today's rules and referees. Simply a must for any fan, this book reveals the very heart of the sport, reminding us that basketball is much more than just a game.

Eleven RIngs, de Jackson
The Last Season: A Team In Search Of Its Soul, de Jackson