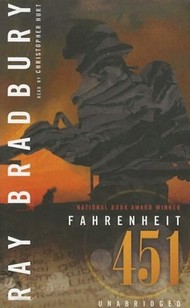 The system was simple. Everyone understood it. Books were for burning, along with the houses in which they were hidden.

Guy Montag was a fireman whose job it was to start fires, and he enjoys his job. He had been a fireman for ten years, and never questioned the pleasure of the midnight runs nor the joy of watching pages consumed by flames.

He never questioned anything until he met a seventeen-year-old girl who told him of a past when people were not afraid and a professor who told him of a future in which people could think. Guy Montag suddenly realized what he had to do.

From AudioFile:
Bradbury's novel details the eternal war between censorship and freedom of thought and continues to be relevant today more than ever. In Bradbury's future, books are illegal and happily so--citizens are too busy watching their wall-sized televisions and listening to their in-ear "seashell" radios to care about the loss of good literature. Guy Montag begins the novel as a fireman who enforces the temperature of the title--that at which books burn--but then transforms and tries to show his society the mistake of censorship.