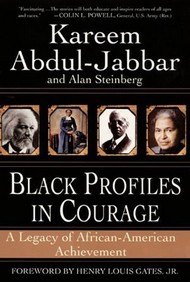 Black Profiles In Courage: A Legacy of African-American Achievement

Kareem Abdul-Jabbar (the NBA's all-time scoring leader) brings us this compilation of inspiring true stories of heroic African-Americans where he looks beyond the worlds of sports and entertainment to other areas in which African-Americans, through their courage and integrity, have contributed mightily to US's history.

In this ideal introduction to black history, Kareem Abdul-Jabbar examines the lives of heroic African Americans and offers their stories as inspiring examples for young people, who too rarely encounter positive black role models in history books or in the media.

Profiled here are Peter Salem, the volunteer soldier who turned the tide at Bunker Hill; Joseph Cinque, leader of a daring revolt on the slave ship Amistad; Frederick Douglass, self-taught writer-orator and escaped slave who forced President Lincoln to issue the Emancipation Proclamation years ahead of schedule; Harriet Tubman, who led at least three hundred slaves to freedom; Lewis Latimer, whose scientific work was integral to the achievements of Bell and Edison; and many more.

Shining a bright light on the touchstones of character, these exemplary stories reemphasize the integral role of African Americans in weaving the fabric of our nation and form an empowering legacy from which Americans of all ages can draw inspiration, wisdom, and pride.

Kareem Abdul-Jabbar retired from basketball in 1989. The author of bestsellers Giant Steps and Kareem: Reflections from Inside, he remains a devout Muslim and an active, articulate spokesperson for African-Americans