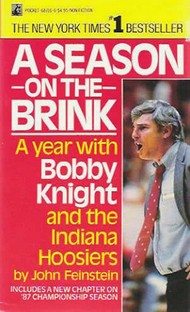 A Season On The Brink: A Year with Bobby Knight...

This classic of the genre is the inside story of one of college basketball's storied coaches and teams recounting the 1985-1986 season at Indiana University, describing the complex personality of coach Bob Knight, and examining the coaching methods which make him one of the best of all time.

A Season on the Brink not only captures the drama and pressure of big-time college basketball but paints a vivid portrait of a brilliant coach walking a fine line between genius and madness.

The book chronicles the basketball season that John Feinstein spent following the Indiana Hoosiers and their fiery coach, Bob Knight.

Feinstein saw and heard it all -- practices, team meetings, strategy sessions, and mid-game huddles -- during Knight's struggle to avoid a losing season. Knight granted Feinstein an unprecedented inside look at college basketball -- with complete access to every moment of the season.

John Feinstein spent 11 years with The Washington Post and has also written for Sport, The Sporting News, Inside Sports, Sports Illustrated and The National. His stories have appeared in five editions of Best Sports Stories, and he has won twelve U.S. Basketball Writers awards.

Let Me Tell You A Story, A Lifetime in the Game, de Feinstein